Among the casualties of the ongoing pandemic are food businesses located near universities in Manila. With distance learning taking the place of classrooms, campuses remain empty. Because of this, businesses lost the majority of their customers, greatly affecting their daily income.

Heaven’s Touch Cuisine is one of those eateries directly affected by the extended community quarantine. For this reason, its owners decided to enter their food business for consideration in the Lark x The Fat Kid Inside campaign.

As one of the chosen winners, Heaven’s Touch Cuisine was granted cash support to keep their business operational. In turn, a portion of the donation was used by Heaven’s Touch to prepare and deliver food packs to various City Hub sites.

A Rough Start Down the Road to Success

It took around three years for Heaven’s Touch Cuisine to really get going, according to Reggie Piadoche, whose parents own the eatery. The business was acquired by their family after its previous owners moved away. Rather than make changes to the name and the space, the Piadoches decided to keep everything as is, and build the business form there.

After 10 years of successful operations, Reggie says that their student-friendly prices, and home-cooked offerings are two major reasons why Heaven’s Touch Cuisine became a community favorite.

When news about Covid-19 started to spread, fewer students would hang out to eat after class. Eventually, school was called off completely, and soon, nearby businesses started closing shop. Although most restaurants in the area are used to slowing down during summer and school breaks, the lull has never lasted as long as the present lockdown.

In an attempt to adapt, Heaven’s Touch Cuisine tried to offer food deliveries early in the quarantine period. However, this turned out to be logistically impractical since they are not located in a residential area, and delivery fees are too costly. They do continue to receive a few food orders, but these are not enough to sustain the business.

Reggie says that they see no viable options for new normal operations at the moment. So, instead of focusing on profit, the family has shifted to giving back. Before becoming a winner of the Lark x The Fat Kid Inside campaign, the Piadoches had already completed a successful food drive, funded by donations they solicited themselves. 3,000 meals were shared with hospital workers, officers at checkpoints, homeless individuals, and those residing in shelters, during this drive. 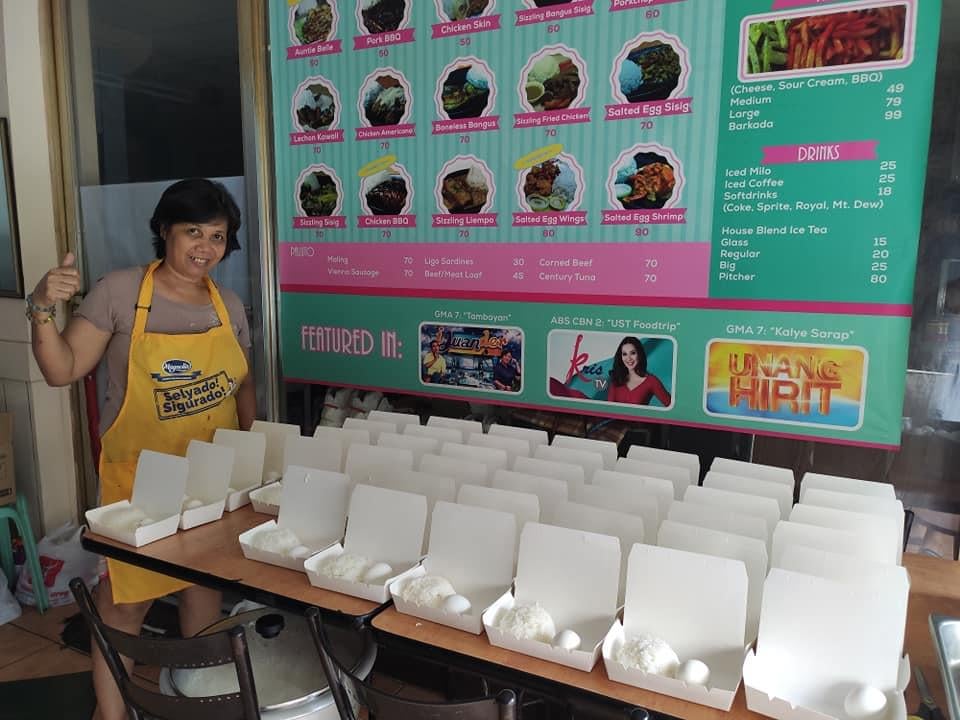 Ms. Ligaya Piadoche, the owner of Heaven’s Touch Cuisine, prepares packed foods for the food drive. She is one of the chosen businesses of the Lark x The Fat Kid Inside campaign.

A Gift That Keeps On Giving

The funds they received from Lark and Erwan enabled Heaven’s Touch Catering to deliver around 2,500 more food packs, this time for blue collar workers at City Hub to enjoy.

The best thing about being chosen for this, according to Reggie, is the recognition that it brings to their initiative of feeding the community. He hopes it attracts more donors, so they can hold even more food drives in the future. He is also glad that his parents have a reason to continue cooking for others, which they love to do.

The new normal is digital, says Reggie, and being tech-savvy is a must for business owners. He is happy to have discovered Lark as a one-stop communication app, through this campaign. It’s hassle-free to use, with everything in one place. What impressed him most about the app was its capacity for sending large files, including videos. It also has the clearest and smoothest video calls among all the apps that he has tried. Reggie now intends to use Lark for coordination in their future food drives.

The Piadoche family has accepted that Heaven’s Touch Cuisine might not stay open much longer. At this point, Reggie says that even if the pandemic shuts down their business, they are content in knowing that they have done good for the community.